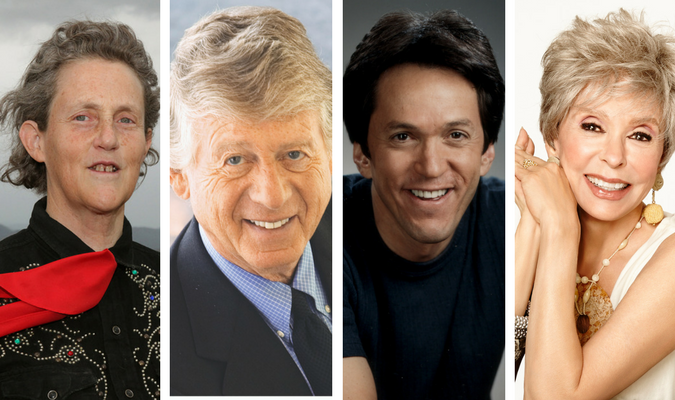 Dr. Temple Grandin is living proof that an individual can thrive against tough odds. Dr. Grandin was diagnosed with autism at a young age and did not even speak until she was four, but her parents fought to keep her out of institutions and in school. Though adversities and challenges were prominent in her adolescence, Dr. Grandin eventually thrived, developing a love for animals. Now, having been named one of Time Magazine’s 100 Most Influential People in 2011, she has revolutionized the livestock industry by designing cattle facilities and working with heavy-hitters such as McDonald’s on animal welfare guidelines. The author of numerous books and the subject of an award-winning HBO film, Dr. Temple Grandin is ready to bring her inspirational story to the citizens of Frederick.

Ted Koppel is best known as the editor and anchor of ABC News’ “Nightline” from 1980 to 2005. He continues to be one of the most trusted names in journalism and has won eight George Peabody Awards, 11 duPont-Columbia Awards (television’s equivalent of the Pulitzer), and 42 Emmys. With his trademark wisdom, wit, and warmth, Koppel takes the Weinberg stage to share his observations on the state of the U.S. and the world, providing unmatched analysis of the important foreign policy and political headlines of the day — and, of course, the people behind the scenes.

Mitch Albom is an internationally-renowned and bestselling author, journalist, screenwriter, playwright, radio and television broadcaster, and musician. From “Tuesdays with Morrie” to “The Five People You Meet in Heaven,” his books have collectively sold more than 35 million copies worldwide, have been published in 45 languages, and have been made into Emmy award-winning television movies. A mainstay in American sports journalism, Albom will take his bow in Frederick by weaving personal stories and anecdotes with a captivating message about the potential in all of us for a giving, meaningful life.

Rita Moreno is one of the busiest actresses, singers, and dancers in show business. With star-making turns in “West Side Story,” “The Ritz,” and “The Electric Company” under her belt, the entertainment icon belongs to an elite group of only eight living performers to have won all four of the industry’s most prestigious awards: the Emmy, GRAMMY®, Oscar, and Tony. A Kennedy Center honoree for lifetime contributions to American culture and a recipient of the coveted Presidential Medal of Freedom, Moreno represents the intersection of selfless service and professional achievement. Appearing in Frederick for the first time, the feisty entertainer brings a sense of humor and wealth of personal stories to the stage, exploring the value of diversity, the power of language, and getting older without getting old.

Tickets for the 2018 Frederick Speaker Series will go on sale with the remainder of the Weinberg Center season. Members can gain early access to tickets on August 10 before they’re available to the general public on August 17. (Not a member? Awesome benefits, including early ticket-buying privileges, can be yours for as little as $35!)

Will you be there, too? See you at the theater!