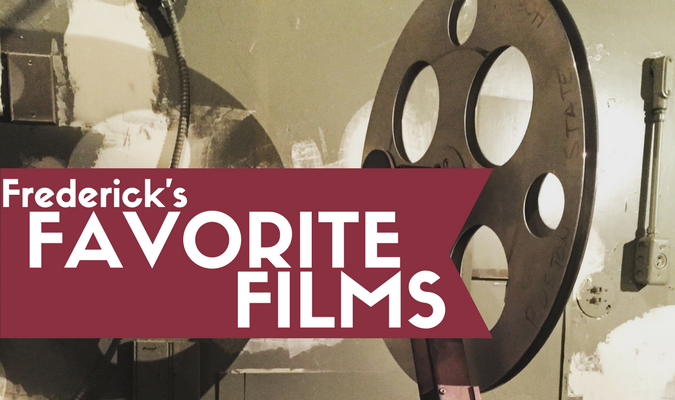 Since the dawn of movies in the 1890s, people have flocked to theaters and shelled out their cash in the hopes of escaping to a different world, if only for a few hours. Even though most movies provide that craved escape, they may not be particularly memorable or worth re-watching. But some films transcend time and circumstance. They are so moving — or funny, or shocking, or unique — that we carry them with us through our lives and look to them for comfort when we need them most. The art of storytelling through film, when executed masterfully, has the power to captivate audiences generations apart. Let’s take a look at some of Frederick’s favorite movies, and why people consider them to be “classics:”

“I love Raising Arizona. It’s so quirky. Holly Gunter yelling at Nicholas Cage always makes me laugh. It’s just so different, and I love it.”

“My favorite classic movie is also my favorite movie of all time: Casablanca. Humphrey Bogart’s cynicism and wit is unmatched in any form of any era of American cinema ever and he’s at the absolute top of his game here. Meanwhile, Ingrid Bergman plays the One Who Always Gets Away with the perfect amount of charm, seduction, ambivalence and strength. Plus, it’s a love story. And who doesn’t like love stories?”

“I love The Sound of Music. When I was in fourth grade I played the role of Marta in my town’s production — I still remember the words to the songs!”

“A classic movie to me is one that no matter at one point I wonder across it I just have to watch it.  For me that is The Shawshank Redemption. I have always been a fan of watching a book or short story adapted to big screen and Shawshank did not disappoint. An intriguing driving story set against amazing locations and memorable score make this not so short movie one of my favorites.”

Whitney Hahn, Digital Bard
“I would have to say that the movie I have probably watched (and quoted) the most is the The Princess Bride. I love the action, the comedy and the characters. For pure looks, it would have to be Blade Runner. Dystopian movies are fairly common now, but in 1982, it was edgy, and the world Ridley Scott created was so rich, gritty and real.”

Melissa Joseph Muntz, Visit Frederick
“If I had to pick a favorite classic movie, I don’t think I could choose between Mary Poppins and The Wizard of Oz. I have easily watched both of these movies more times than I can count and I still love everything about them. The music, the costumes, the nostalgic feeling they evoke. I also love the fascinating stories behind the making of these classics. There is something to be said for films that are so brilliant that they don’t need modern technology to impress audiences over 50 years later.”

Grace Cassutto, New Spire Arts
“My favorite classic movie is Raiders of the Lost Ark. I love Raiders because Indiana Jones is a Nazi-punching, whip-wielding, artifact-saving archeology professor. Add in a bada** love interest, a John Williams score, and a Wilhelm scream and you’ve got a perfect classic movie.”

Leigh Adams, Ausherman Family Foundation
“One of my favorite movies is Hook starting Robin Williams as Peter Pan. I think I could quote the entire movie!”

Branden McGee, Flying Dog Brewery
“One of my favorite classic movies is Good Will Hunting.  How can you not like the line ‘Do you Like Apples? Yeah. Well, I got her number. How do you like them apples?’”

Leeann Dickerson, Downtown Frederick Partnership
“I’ll watch Under the Tuscan Sun anytime, anywhere, with anyone. Accidentally moving to Tuscany, then buying (and restoring) a villa has to be the single greatest accident a person can make. I don’t think it’s possible to watch this movie without at least a slight desire to pack your bags and head out on the next ‘Gay Tour of Italy.’”

Bob Miller, WFMD
“Raiders of the Lost Ark would have to be my favorite classic movie. It combines everything I like in a movie. It has a throwback feel of your Saturday matinees. It also combines humor, adventure, and great special effects. It’s a great curl under the blanket with a bucket of popcorn movie.”

Stacey Collins, PNC Bank
“1999’s The Matrix. The movie that gave action movies a futuristic makeover. And, it opened up a whole new perspective on the time space continuum and what could be possible. Favorite quote: ‘Throughout human history, we have been dependent on machines to survive. Fate, it seems, is not without a sense of irony.’”

This year, we’ll play host to the Frederick Film Festival yet again. The event aims to provide access and exposure to the art of film, and to cultivate film appreciation through exhibition of films and other film-related educational activities. Come join us from June 23-25 and get a look at the best up-and-coming film directors. Who knows? Maybe you’ll see work by someone who is destined to direct a “classic.”