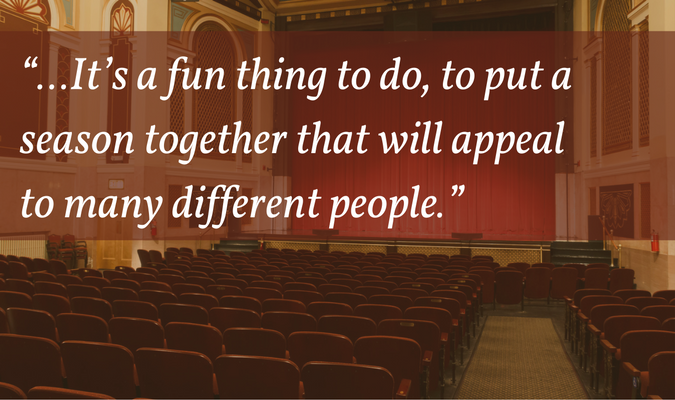 Just last week, we had our first ever Facebook live interview between our marketing manager Ashley Birdsell and executive theater manager John Healey.

John has been overseeing our theater management and programming for ten years. That said, when we decided we wanted to find out what to expect in the upcoming season, we knew exactly who to turn to!

In case you missed it, here are a few highlights from last Thursday’s live interview. The full interview is still up on our Facebook for your viewing pleasure. Thanks, John!

What do you do and how do you book the shows for this season?

I just put names in a giant hat and then I pull them out! (laughs) No, what I try to do is select a season that is going to be diversified, is going to bring things to the Frederick area that I think the greater community will appreciate… and things that I’ve talked with other presenters in the area and across the United States [who say], “Yeah, this sounds pretty exciting.” And, things that just kinda look cool…that I think would be really kinda fun to bring to the Weinberg Center and so that people don’t have to go to D.C. [or] Baltimore— they can come to Frederick.

Are there any shows in particular you’re very excited about this season…other than all of them?

(laughs) Yeah, well that’s a bit like asking who’s your favorite child. It is hard to say sometimes! There are people in the Tivoli Discovery Series, in which we bring in new and emerging artists [and audiences can] pay-what-you-want—we ask for a ten dollar donation but you don’t have to give it to us. We’re more interested in exposing these artists to the Frederick community. That’s always been a piece of my heart because I think it’s an important part of what we do.

Arlo Guthrie always puts on a terrific show… William Shatner I’ve never seen live… This is his Broadway show that he’s bringing in here. So that’s gonna be a pretty crazy time.…see, now I’m just gonna start talking about all of them! (laughs) Because it is, it’s a fun thing to do, to put a season together that will appeal to many different people.

What if people want to suggest a possible show they want to see on our stage?

I think that’s a great idea and I love getting suggestions.  Go to our website and then click on Contact Us and send me a link or your suggestion.

Is there anything you’d like to add about this wonderful season of ours?

We’re going to be adding things! So keep following us. There are things in the works already that we just can’t announce yet, but we will be announcing them soon!

If you’re looking for more insider info on what John had to say about our 2016-2017 season, check out the full interview on our Facebook page, or explore our upcoming events when you hop on over to the Performance & Events section of the site. See you at the theater!